The Girls Have The Blue Box

When MG’s godfather said “I’d really like to build the girls a wendy house” just before last Christmas, I was expecting a small playhouse which we’d all be thrilled with because it was handmade specially. Their godfather, however, had bigger plans…

First, there was the matter of where it was going to go. We had some huge trees in our pretty small garden that DH & his dad had cut down the year before, leaving the stumps to be dug out ready. Then measuring and making a base and frame. This happened in our garden over several weeks (but what we didn’t know at this point was that something extra was being constructed in another garden at the same time…)

A brief history of playhouse construction in pictures:

The treehouse annex was created in one day because MG said to her godfather “But I really wanted a treehouse!” on first seeing the frame 😆 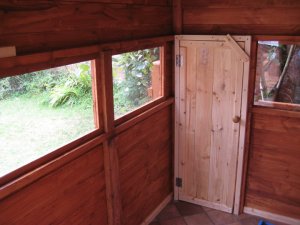 And what was being constructed elsewhere? Only the coolest “porch” a playhouse could possibly have (with lights too…)

Actually, it turned out not to be possible to transport the completed TARDIS in a trailer as it would have been shaken up too much so it was flat-packed, but MG’s godfather really wanted to drive down the motorway like that – it would have been fantastic 😆 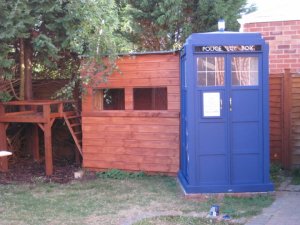 My daughters’ playhouse is a TARDIS! With a treehouse! 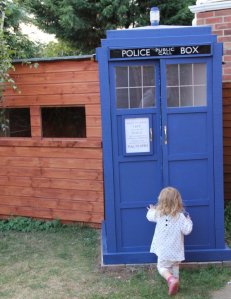 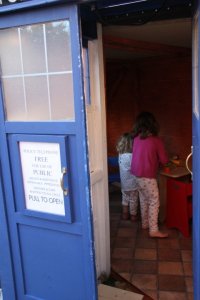 And it is bigger on the inside 😆

Tagged bigger on the inside, Doctor Who, DrWho, fantastic godparents, Playhouse, TARDIS