I used to want to be an author. I used to read avidly, literally hundreds of books a year. And I wrote, and wrote. But this was way back in my teens and early 20’s, now I’m 36 it’s been 15 years since I wrote regularly and over 10 years since I wrote anything at all. But inspired by the Children’s Writer blog and behind-the-scenes writing comments from (too many to mention) picture book authors and illustrators on Twitter, I thought I might revisit a story that’s been in my head all that time and write it for my girls…

My aspirations to be an author have faded over time, and I don’t have the patience to really write at this stage in my life but I thought I could manage a short story just for my girls. I hoped to be able to pull the threads of my ideas together, put the words in some sort of order and sort out the ending so it worked. Ideas are easy, writing is the hard part!

With that in mind, I started to think of the opening sentence(s). Perhaps just writing the story down first would be the best idea, but it’s been in my head for so long I thought I’d start at the beginning. Fiction Fridays have taught me that the first sentence can really sell a book to the reader. The story is a non-traditional fairy tale, so I looked for inspiration: 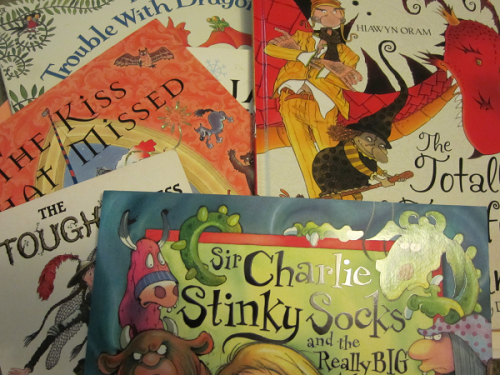 “Once upon a time there lived a King and a Queen who weren’t very good at it.” The Tough Princess (Waddell & Benson)

“Once there was a Dragon who was convinced he was TOTALLY TERRIFYING.” The Totally Terrifying Three (Oram & Melling)

“Once upon a Tuesday the king was in a hurry as usual.” The Kiss That Missed (Melling)

“Once upon a time, there was a deep, dark forest, where monstrous trees groaned, terrible beasties moaned and wiggly woos waited to tickle your toes.” Sir Charlie Stinky Socks and the Really Big Adventure (Stephenson)

“The trouble with Dragons is… Dragons make Dragons and they make some more till there are wall-to-wall Dragons making Dragons galore.” The Trouble With Dragons (Gliori)

“Long, and long ago, when Oberon was king of the fairies, there reigned over the fair country of Phantasmorania a monarch who had six beautiful daughters.” The Ordinary Princess (Kaye)

The Ordinary Princess isn’t a picture book. It is however a perfect fairy tale. I think it’s the book I want to write. Except it was already written over 30 years ago! It definitely deserves its own post.

After looking at the inspiration, I thought about the opening lines for “my” story. Hmmm, maybe I’ll think about writing again in another ten years… 🙂

Rumblewick and the Dinner Dragons by Hiawyn Oram & Sarah Warburton 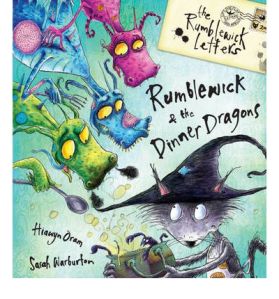 Rumblewick and the Dinner Dragons is a book designed for young children to devour from beginning to end. There is not a ‘boring’ page in the book – even the copyrights appear as steam coming out of a cauldron. This is a definite plus, my three year old always thinks I’m cheating her out of something when I flick through the first pages of most books to get to the story!

This story is narrated by Rumblewick, a witch’s cat to a very “unwilling” witch. In this book Haggy Aggy (Rumblewick’s witch) wants to love and protect “terri-frying” dragons, which involves inviting a few of them over for dinner. Poor Rumblewick relates the proceedings via letters to his best friend and fellow witch’s cat, Grimey. The dragons are beautifully realised, colourful creatures with wide faces, skinny arms, big tums and very sharp teeth. Haggy Aggy is atypically dressed in flowery pink, oblivious to any danger, and it’s up to quick-thinking Rumblewick to save the day with a very ingenious “feast”.

This is a book designed to be experienced – with cut outs, chomped corners and lift-the-flap style spells and mini books within the book. There are double-page fantastically detailed pictures, along with doodles dotted round scrapbook-style layouts. This is a book to be read again and again, and to discover something different every time: the frog trying on lipstick, receipt from “Crafty Co-Op”, bat-shaped door handle… The frogs are definitely ones to look out for, and they appear on most of the pages.

Rumblewick and the Dinner Dragons is probably better for children slightly older than three (I think it’s aimed at 5+) but even so my three year old (who loves stories with witches and dragons best) still enjoyed the story, looking out for the frogs and lifting the flaps. I’m loathe to compare series but I’d say fans of Winnie the Witch should really enjoy Rumblewick, as would those who enjoy Emily Gravett’s interactive books. Personally, I think 30-something mothers should also be allowed to like picture books, and I thoroughly enjoy sharing this one with my daughters.